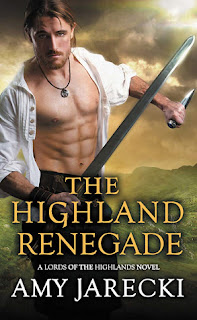 Laird Robert Grant has had his eye on Janet Cameron, daughter of a highland laird, for a while even though the 2 clans are sworn enemies. When she travels to a nearby town with her brother, Kennan, to celebrate the festival of Samhain, Robert hopes to get to know her better. Unfortunately, due to a series of unfortunate events, Robert ends up rescuing Janet from the clutches of British soldiers and they head to the mountains to lose them.

I enjoyed this story, but I thought Janet was a bit obnoxious in the beginning of the story. Her disdain for Robert was enforced by the opinions of her father and brother. All that changes when due to an accident while fleeing the British, she is forced to recover at Robert's home. I liked Janet's kindness to Robert's sister Emma and slowly she begins to see for herself that Robert is a kind and caring laird. Their attraction for each other grows even though Robert knows Janet's father will never give his permission for Robert to marry Janet. The story dragged a bit getting to the conclusion and I did skip a number of pages to reach the end and find out what happens. Fans of Scottish history and romance will enjoy this story.