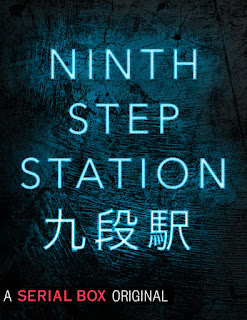 Serial Box will release Ninth Step Station in bundled ebook and audio, a crime procedural taking place in a future version of Tokyo. Ninth Step Station carries the forward momentum of CSI and Law & Order or a Tana French book, while also maintaining the futuristic political intrigue of Netflix’s Altered Carbon, which is itself based on the novel by Richard K. Morgan. The series was written by the blockbuster team of Malka Older, Fran Wilde, Jacqueline Koyanagi, and Curtis C. Chen. You can read more about the author team here.

The world of Ninth Step Station takes place after years of disaster and conflict have left Tokyo split among great powers.

Together, they must race to solve a series of murders that test their relationship and threaten to overturn the balance of global power. And amid the chaos, they each need to decide what price they are willing to pay for peace.

Serial Box brings everything that’s awesome about TV to what was already cool about books. Read or listen to carefully crafted episodes written by award winning and bestselling teams of writers delivered to your phone weekly throughout three month seasons.

Serial Box, which NPR recently called "the HBO of reading," produces original series that are released in ebook and audio episodes through their app(s), website, and third party retailers (iTunes, Amazon, etc). Readers/listeners pay $1.59 week by week or $14 in advance for a whole season (10 episodes). Serial Box brings the power of appointment-based consumption to reading for the first time since Charles Dickens & Little Nell. Visit serialbox.com for more information.