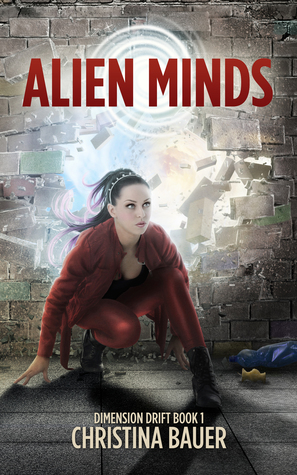 Can you give us a brief overview of your latest book? Is it part of a series? ALIEN MINDS is the first full novel in my Dimension Drift series. It follows the adventures of high school science geek Meimi Archer and Thorne, an alien warrior-prince who falls in love with her

Have you ever had a minor character evolve into a major one? Did that change the direction of the novel at all?
In ALIEN MINDS, Thorne originally didn’t have any brothers, but I added them in during a later revision. Justice and Slate quickly became my favorites!

Did you try the traditional route to publishing, i.e. querying agents/publishers?
Oh, yes. For years. It wasn’t a fit for me, mostly because they all told me to pound salt. Then I published on my own and have since moved more than a million ebooks.

Are you currently under a traditional publishing contract for future books or do you have manuscripts that you will self-publish? Are you doing both?
I publish five novels each year, so there really isn’t room for another publishing house to layer in there at this time. Never say never, though!

What factors influenced your decision to self-publish your book(s)?
I self-publish because I’m very picky about marketing and planning. Long story short, I’m too much of a control freak to hand that stuff off to other people.

If you used a graphic designer/publisher’s designer, how involved were you during the creative process for your cover?
I’m very hands-on in choosing good design and editing talent. I can’t emphasize enough how important this is.

Do you belong to a critique group? Have they helped improve your writing?
It’s taken me a while to find a group of editors that I trust. I feel incredibly fortunate about where I am today!

Some fun facts about you, which do you prefer – dogs or cats? Chocolate or vanilla? Coffee or Tea? Talk or Text? Day or Night?
Answers: Dogs (although to be fair, I’m allergic to cats). Chocolate (the idea of coconut makes me ill, for the record). Talking over texting. And day is better than night, although as long as I’m napping, I’m open to either. Mmmm, napping.

What’s next for you?
A paranormal romance with dragons called ZINNIA! It’s part of the Angelbound Offspring series.

Thanks for having me stop by! I enjoyed answering these questions and hope to return on a future tour!

On my seventeenth birthday, I wake up in the hospital to find I just survived a sketchy but terrible accident. My parents stand by my bedside—both are beautiful, wealthy, and super-nice. They tell me that once I leave the hospital, I’ll attend the prestigious ECHO Academy, where I’ll churn out equations for the government along with my mega-smart peers.

So, I’m living the perfect life.
Then why does everything feel all wrong?

My parents, my house and even ECHO Academy…none of it fits. Plus, what’s up with Thorne, my brooding yet yummy classmate who keeps telling me I need to remember my true past, which seems to have included a lot of us kissing? That’s one thing I’d really like to remember, except for the fact that I’m pretty sure Thorne is hiding a ton of nasty secrets of his own, including the fact that he may not be from this world. But considering how my own past seems alien to me, it’s not like I can judge. Plus, Thorne has dimples. That’s a problem.

And worst of all, why does it feel so yucky to work on these calculations for the government? It’s all supposed to be part of ECHO, but my heart tells me that I’m helping something truly terrible come to pass. Thorne seems to think that kissing him again will release my real memories.
Maybe it’s time to pucker up.

This new series is perfect for: fans of urban fantasy, action & adventure, cool science, evil corporations, forbidden romance and hot new classmates who may or may not be aliens.

Author Bio:
Christina Bauer thinks that fantasy books are like bacon: they just make life better. All of which is why she writes romance novels that feature demons, dragons, wizards, witches, elves, elementals, and a bunch of random stuff that she brainstorms while riding the Boston T. Oh, and she includes lots of humor and kick-ass chicks, too.

Christina graduated from Syracuse University’s Newhouse School with BA’s in English along with Television, Radio, and Film Production. She lives in Newton, MA with her husband, son, and semi-insane golden retriever, Ruby.
Be the first to know about new releases from Christina by signing up for her newsletter: http://tinyurl.com/CBupdates