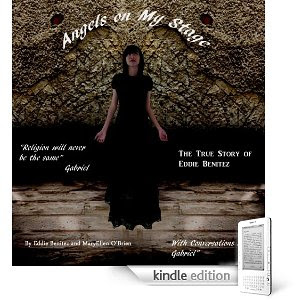 Briefly describe your journey in writing your first book.
Well, Debra, this is my first independently published book, but not my first book.
I have had two books published traditionally prior to this.  Both are non-fiction, spirituality books published by two of the major religious publishers.  In this new book, Angels on My Stage, The True Story of Eddie Benitez with Conversations with Gabriel, a different path was taken.
First, as a writer I wanted to break out of the religious publishers “ghetto” if you will, and be published in a mainstream way.  I no longer fit that niche in any case, as I have moved on from religion (as in institutions, organized groups) and embrace spirituality now.
Secondly, this book is co-authored with Eddie Benitez, and he is a major recording artist.  As a guitarist he is legendary in the Latin Jazz world, and now is producing some amazing World Music.
Angels is his memoir first, with me as his writer.  The latter part of the book, the section Conversations with Gabriel, is then told in my voice, as I was witness to these “conversations” along with Eddie.  So in the memoir portion I am his scribe. In the Gabriel portion, I tell the story in my own hand, of the angelic communications we received.  Eddie’s other area of expertise is with the spirit world, and he was featured on the Discovery Channel’s series, A Haunting as well.  I bring theological expertise to the enterprise, as a person with two masters’ degrees in theology.  And I’ve been working around music and the record industry all my life as a veteran Rock D.J.
So with this book, when we discovered that Amazon was allowing independent publication with Kindle, we knew instantly it was the way to go — and the way of the future of books.  Eddie has been with record companies and has put out music as an Indie artist.  Now he’s with NuGroove Records, but has a real soft spot for Indies.  Same with books — the Kindle publication allowed us to get the book out when WE wanted it out, without waiting.  Anyone who’s published traditionally knows there’s first the shopping of the book, which can take a long time, then there’s the publisher’s seasonal schedule of books.  It can take a year or two for a book to get published after acceptance.
With Kindle, we can get the book out, and still seek brick and mortar publication at the same time.
Did you query agents or traditional publishers before publishing on Amazon?
No.  We went right to publication, and will do the traditional seeking conversely.
What factors influenced your decision to self-publish?
Freedom, timeliness, and control over the book.
Will you try to garner a traditional publishing contract for any future books?
Sure! It would be foolish not to do both.  What author doesn’t want their books also available in bookstores?
Did you design your cover art?  If not, would you care to share your graphic designer’s information?
Eddie designed the cover art.  The model on the cover is actually his 16 year old daughter, Tiara, who herself is a photographer. And she is going to school now to be a recording engineer.  She’s the “angel” on the stage on the cover. The graphic artist was Eddie and photoshop.
How did you feel when you got your first sale?  Are you pleased with sales so far?
Well it’s not my first book, and not Eddie’s first creation since he’s had albums out. It is a good feeling.  Sales so far are ok, but we are looking into ways to seriously promote the book.
What kinds of social media [twitter, facebook, webpage, blog, writing forums] are you involved with trying to garner attention for your book(s)?
We have a Facebook page for the book. I twitter about it often.  I also write as a columnist for Examiner.com and have been able to write about the book there, which is a national news site.
Besides Amazon, are there any other sites where your books are for sale?
Not yet.  We will get it on iPad though.
What’s next for you?
We are working on another book as co-authors already — stay tuned. It’s paranormal, it’s about things like exorcism and who’s who in the psychic world, and who’s real.
Thanks for the opportunity to tell you about our experience with Kindle.
Stop by our page on Amazon: http://www.amazon.com/Angels-My-Stage-Conversations-ebook/dp/B003DA42JY
Posted by Debra L Martin at 7:15 AM