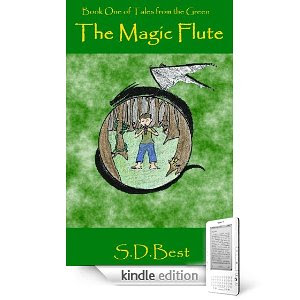 Available for sale at Amazon http://www.amazon.com/Tales-Green-Book-Magic-ebook/dp/B003B66HRA/ref=pd_rhf_p_t_1


Briefly describe your journey in writing your first book.
Towards the end of college I got the idea in my head to write a book, an epic fantasy that would define my career forever. It sucked. I had never written anything over 5,000 words before, and even though each time I started over I did better the fact remained that I was starting over a lot.
When I graduated I decided I needed a new project to work on. Deciding that my original idea was far too much for me to juggle as an inexperienced novelist I opted for a simpler fantasy scenario, i.e. human child gets taken to a magical world. Yes, we all know it’s been done before, but the benefit of cliché is that it gives you a base to get started. The ironic part is that once I got going Tales from the Green became more complicated than my original unnamed story.
Did you query agents or traditional publishers before publishing on Amazon?
I sent out emails to four or five agencies and checked out the websites of many more before deciding to go the self publishing route. I really didn’t try very hard, to be honest.
What factors influenced your decision to self-publish?
I recognized fairly quickly that I was not someone an agent would see as a “good risk.” It’s not that I doubted the quality of my work, but there I was, a complete unknown with an oddball fantasy story that was the first book in a series and not a stand-alone novel. I had three options at that point:
1) Write something much more mainstream and try to get that published, and then use that credibility to get my Tales from the Green series through the door.
2) Try to get short stories published in magazines and win contests to build a reputation so that an agent would be more likely to actually read my proposal.
3) Self-publish and let the readers decide whether they liked me or not.
Being a fairly impatient person who didn’t want to wait years before my first book ever saw the light of day, I opted for #3.
Will you try to garner a traditional publishing contract for any future books?
Yes, I definitely plan on it. It’s the indie author’s dream to get a contract, isn’t it? I would like to finish my fantasy series and present it to agents and publishers as a complete piece, complete with sales data and hopefully some good reviews.
Did you design your cover art?  If not, would you care to share your graphic designer’s information?
I do all my own covers, the layout, the artwork, everything. Of course, there’s a reason why I write novels instead of comics. I hope more people find them quaint and endearing rather than sloppy and childish.
If you used a graphic designer, how involved were you during the creative process for your cover?
I do plan on getting a professional artist to redo my cover art one of these days. I’ll probably wait until the last book in my series is complete. You know, take it to the next level and all. My plan is to give an artist my existing covers and say “do this, but better!”
How did you feel when you got your first sale?  Are you pleased with sales so far?
I got my first sale within hours of my book going live on Amazon. I was so excited that a complete stranger actually paid money for something that I wrote. I saved a screenshot of my Amazon DTP transaction page showing that first copy sold.
So far sales have been going well, at least by my standards. I’ve gone from coffee money to fast food money. May has seen me sell four times as many copies as I sold in March or April, so hopefully as word gets out that upward trend will continue.
What kinds of social media [twitter, facebook, webpage, blog, writing forums] are you involved with trying to garner attention for your book(s)?
My main outreach is through Kindleboards.com and MobileRead.com, where you will see me as Greenkeeper. I also keep a blog about my writing at http://sdbest.blogspot.com. I generally don’t Tweet and I rarely check my personal Facebook page, let alone feel the desire to make one for my books. My computer time is limited due to my loveable and time consuming baby daughter, so if I’m at the keyboard I’d rather be writing.
Besides Amazon, are there any other sites where your books are for sale?
For those who don’t have a Kindle or who prefer DRM free downloads, both my books are available at Smashwords.com.
What’s next for you?
I plan to have The Tainted Sliver, the third book of the Tales from the Green series, done by the end of this year. From there I may try for another genre since I’ve been writing fantasy for several years now.
Tales from the Green Book One: The Magic Flute
Kindle: http://www.amazon.com/Tales-Green-Book-Magic-ebook/dp/B003B66HRA/ref=pd_rhf_p_t_1
Smashwords: http://www.smashwords.com/books/view/11500
Tales from the Green Book Two: The Wizard’s Tome
Kindle: http://www.amazon.com/Tales-Green-Book-Two-ebook/dp/B003J35JUQ/ref=pd_rhf_p_t_1
Smashwords: http://www.smashwords.com/books/view/13678
http://sdbest.blogspot.com