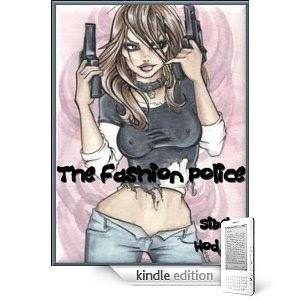 Available at Amazon http://www.amazon.com/Fashion-Police-Comedy-Mystery-ebook/dp/B003B3NYS8
Welcome author Sibel Hodge who writes mysteries with lots of humor thrown in!
Briefly describe your journey in writing your first book.

I've always wanted to write women's fiction. As a little kid, I was always scribbling stories. In the UK I was too busy in the rat race, paying the mortgage, to have enough time to actually concentrate on writing. But when I moved to North Cyprus four years ago, I finally had the time, peace, and relaxed lifestyle to give me the inspiration I needed to start my novels. In fact, the idea for my debut romantic comedy novel, Fourteen Days Later, came to me while sitting on the terrace, watching the stunning Cyprus sunset. It has now been recognized through literary awards such as the Harry Bowling Prize 2008 and The Yeovil Literary Prize.

What factors influenced your decision to self-publish?

Unfortunately a book could be brilliantly written, have fantastic characters and plot, have great commercial potential, and yet still not be taken up by a publisher. I think publishers are afraid to take risks on new writers; they want to stick with established authors who already have a large readership. With the existing economic crisis as well, this further decreases the opportunities for new authors to break through and become published. But there is a real change in the attitude of readers, retailers, and mainstream publishers to self-published books. In fact, many independently published titles are gaining a lot of publicity and sales, and these authors have been signed by major publishing houses.

What inspired you to write your second novel, The Fashion Police?

I worked for Hertfordshire Constabulary for 10 years, and having a sense of humour was a very important part of keeping you sane, so it felt natural for me to write comedy. I love reading romantic comedies, but I also love mysteries, thrillers, and crime novels. My debut novel was a romantic comedy and I wanted my second novel to be a fun comedy mystery. I love screwball humour, which is still immensely popular. What better way to eliminate the stress of our modern lives than by laughing it away? I usually get my plot and character ideas from a range of things: a book I've read, a film I've seen, someone I know, a snippet of conversation, real life events, personal experiences, then I mix ideas together, topped off with a lot of imagination! The main inspiration for The Fashion Police came while watching a show about supermodels, but the plots and subplots came to me in bits and pieces.

Did you query agents or traditional publishers before publishing on Amazon?

I did and received a lot of interest and positive feedback, but it's not always about great novels. I think a lot of luck is involved nowadays, and maybe it's about writing the right book at the right time for the right publisher. The traditional publishing world of landing an agent and publisher has changed so much since the introduction of ebooks, which have really increased the potential for Indie authors.

You do have to have a thick skin to be prepared for all the rejection letters – no matter how nice and full of praise they are! You have to try, try, try, and yep...keep trying. Of course it's hard getting rejection letters, but it's part and parcel of becoming a writer. They're not always right! Even J.K. Rowling received many rejections before she got a lucky break. You also have to try and create a buzz about your work so that someone will eventually notice your potential.

Will you try to garner a traditional publishing contract for any future books?

I'm undecided at the moment. Indie publishing has come such a long way in the last few years, and if my first two novels carry on selling as successfully as they've been so far, then I may even go straight to independently publishing my third novel.

Where do you get the ideas for your novels?

Many ideas come to me while sitting outside my villa on a lovely, hot summer evening, enjoying the view with a glass of wine! The ideas are a mixture of real life events that people have told me about, films I’ve seen, books I’ve read, or personal experiences, but of course it’s all topped off with a lot of imagination. All my characters are mixtures of friends and family, people I've met or observed, even myself. I usually take an element of one person's character and mix it with someone else's to form a whole new character for a novel. Inventing characters is one of my favourite elements of working out a new novel.

How did you feel when you got your first sale?  Are you pleased with sales so far?

I got my first sale a couple of days after I launched my website. Because it's such a long process writing a novel and you put so much of yourself into it, it's such a massive achievement when you get your first sale. You can sit back after all the passion and creativity and think: Wow! I did that.

My sales really took off after launching Fourteen Days Later and my second novel, The Fashion Police, on Amazon Kindle, and I'm thrilled with the response. I've also just launched both novels in paperback to reach an even wider audience.

What kinds of social media [twitter, facebook, webpage, blog, writing forums] are you involved with trying to garner attention for your book(s)?

Social Media is becoming so huge now for keeping up to date with information and opportunities as well as marketing yourself and your novels. Being an Indie author, you can't just concentrate on writing; you also have to get involved in the marketing as well.

I'm active on Twitter and Facebook, as well as various book related forums. I have my own website – www.sibelhodge.com – which includes my health & lifestyle blog. I'm also a freelance features writer and regularly write for newspapers, magazines, and blogs.

Besides Amazon, are there any other sites where your books are for sale?

Yes, my books are also available in paperback from Amazon's sister company, Createspace, and in many ebook formats from Smashwords, Amazon, and Lulu. All the links are listed on my website: www.sibelhodge.com

What’s next for you?

I have so much that I want to do. Of course I’d love my novels to be picked up by a mainstream publisher to sell in paperback version. Several editors and literary consultants have suggested that I rewrite both novels into scripts for the big screen, and this something I’m currently working on. I’m also planning a series of books following on from my comedy mystery novel, The Fashion Police, which will send Amber Fox on various adventures.