Review of FORBIDDEN THE STARS by Valmore Daniels 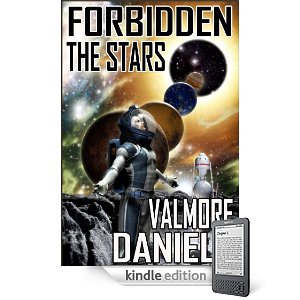 3.5 stars out of 5
I received a review copy from the author.
This book is an ambitious story weaving multiple storylines at once.  There is Michael Sanderson, President of Canada Corp’s Space Mining Division; Justine Turner, the first female astronaut who pilots Orcus 1 to Pluto; 10 year-old Alex Manez; the criminal base of operations on Luna and the legend of Kulkulkan, the Mayan god of the sun, the oceans, the earth and the sky.  Maybe, a little too ambitious.
Alex Manez travels with his parents on a survey mission to the asteroid Macklin’s Rock in the Sol System.  This should have been a routine mission, but tragedy strikes and his parents are killed in an explosion.  This is no ordinary explosion, but one that will change space exploration for mankind.  The asteroid disappears only to reappear four hours later in a Plutonian orbit; the first instance of FTL aided by a mysterious element named Kinemet.  Young Alex survives the FTL travel, but his exposure to kinetic element fundamentally changes him.  Justine and her crew who were currently serving on a mission to Pluto rescue him.  She must abandon her mission on Pluto to bring Alex back to Earth.
I wanted to bond with Alex and everything that he must be feeling, but the author keeps Alex at bay keeping him distant and aloof from every overture that Justine makes to befriend him.  We do get to know Justine better, a woman who lost everything in her personal life, because of her unfailing dedication to her career.  From the moment Justine rescues Alex, however, she develops an over protectiveness toward the young boy.  This is where Mr. Daniels gets it right.  I felt that I knew Justine and could understand the reasons why she made the decisions she did in her life.
Not being a scientist, I found myself skipping over many of scientific descriptions and explanations.  These don’t interest me, but this is in no way a reflection on Mr. Daniels who obviously did an enormous amount of research for this book.  I prefer to know more about people in the story – their motivations, desires, and dreams.
Without giving away any spoilers, there are many events in this book that keep the action moving.  All of the storylines came together and I finished the book within a week.  It was an enjoyable read and I have no problem recommending this book to fans of science fiction.