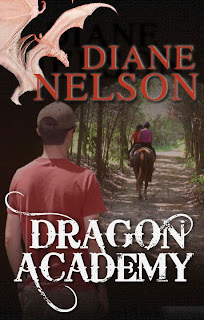 With high school finished for the summer, Nick looks forward to visiting his aunt and uncle in New Jersey. What awaits him is a heat wave like no other - and the last two Greywings on the planet. Nick has an innate ability to train horses but will he be able to translate his amazing skill to these teenage dragons?

The steaming soup of mid-summer heats up tempers and tests resolve as Nick vies with fellow trainers, Keith and Maxie, for mastery over their new charges. The dragons, Nikita and Michael, typical teenagers themselves, have other ideas.

Nick treads a torturous path through a minefield of competing demands: the expectations of his aunt and uncle, recalcitrant horses, the Academy’s female students and the overwhelming egos of Nikita and Michael. One small mistake erupts into a conflagration that hurls everyone into a race against time and forces of nature.


Diane has a smooth writing style that blends fantasy and reality into a believable story. "Dragon Academy" would make a great film. It would also make a wonderful present for anyone who likes Harry Potter or Eragon...--Mandy Ward

It's one of those rare gems you come across and have to share. --SCAVOLA

As a teacher, I would definitely recommend my students read this book. --LM DeWalt

I finished reading Dragon Academy and sat smiling to myself for a while. It captured my imagination and took me on a marvelous journey. --Suzanna Burke

Action, humor, teenage angst, and, of course, plenty of dragons--this one has it all.  And, like a classic action yarn, Dragon Academy isn't just for teens; it will appeal just as much to adult readers.  --Mark Marker
Author Bio: 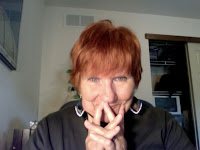 After a thirty-year career as an analytical chemist and technical writer, Diane turned to writing fiction full time. Her first YA novel, Dragon Academy, was released in June 2010 [ireadiwrite Publishing], with the print version launched in November 2010. She contributed a story, Dance Macabre, to Dancing in the Dark: An Anthology of Erotica that she edited under her pen name ‘Nya Rawlyns’ [Night Publishing]. Mounted Exercises launched in July 2010 [also Night Publishing]. She edited another anthology, Flashes Through Time, that debuted in August 2010.
Diane has taken a particular fancy to flash fiction, narrative poetry and short stories. Several online WebZines, Ezines and blogs feature her work: Rammenas, Little Episodes, Wired Ruby, Welcome to Wherever and Short Stories for Women.
Posted by Debra L Martin at 8:00 AM