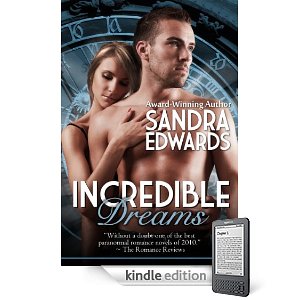 Book Blurb:
Incredible Dreams is the story of a modern-day ghost whisperer who travels through time to save the life of a WWII fighter pilot and ends up jeopardizing her own existence.
Izzy Miller prefers to call herself a spiritual therapist because she thinks it makes her sound more professional than plain old ghost-whisperer. She expects her latest project to be quick and easy because exorcising military personnel is pretty routine.
But there's nothing easy or routine about Captain Jack Baker—he's a rather forgetful spirit and somewhat mischievous. And even though he's intrigued by the US Government's latest attempt to remove him from the only place he can ever remember being...he has no intentions of going anywhere.
Plans to exorcise Jack are quickly sidelined when Izzy discovers a portal into the past inside her dreams and sets out to change his fate. Trouble is...when she gets back there, she can't remember anything but her name. She still sees ghosts, but is far less accepting of her gift. And, to make matters worse, a demonic force pretending to be the forgetful heroine's sister has her own plans—to steal Izzy's soul.

Review Snippets:
From Readers Favorite Book Reviews ~ “This is one of those special books that will stay with long after you read the last page.”
From The Crazy Bookworm ~ “Incredible Dreams gives you the perfect dose of romance and suspense with some witty humour thrown in the mix.”
From The Romance Reviews ~ “Without a doubt one of the best paranormal romance novels of 2010.” 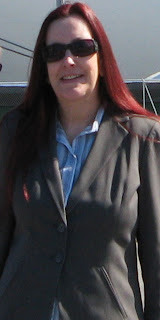 Author Bio: Sandra is an award-winning author with eclectic tastes. She writes in a variety of genres such as paranormal (mostly time travel and reincarnation), contemporary, and suspense. Her books often push the envelope and step outside the boundaries of conventional romance. She lives in the U.S. (west coast) with her husband, two kids, four dogs and one very temperamental feline.
http://www.sandrawrites.com
http://www.facebook.com/SandraEdwards.Author

Bright lights blazed over her face. The smell of stale ale and cigarettes choked the space around her. She squinted, uncertain of anything but the stage she stood on. A blinding glare silhouetted the smoke-filled room and hid the identities of what she was slowly coming to recognize as an audience.


Music, the tune of a vaguely familiar song, filtered through the air. Lyrics came to her seconds before they poured from her mouth. Nervous at first, she worried the fountain of words would stop as fast as it had begun. When she realized it wouldn’t, a confidence joined the song and bolstered her voice.


When the song ended, Izzy panicked. What did she do now? Where did she go? She started walking, and even though her mind was unable to plot the course, her body knew where to exit the stage and how to get to the bar.


Confusion muddled her thoughts as she glided down the steps and followed a path alongside the audience.


Where the hell am I and what am I doing here? She leaned against the bar and attempted to gain her bearings.


My poison? She glanced up, greeted by the barkeep’s charming smile. Well, a drink might help. Couldn’t hurt. “You got any Ouzo?”


“No.” The bartender’s quick and calm reply suggested he knew what she was talking about.


Too bad Izzy didn’t. She had no idea what Ouzo was or where she got the notion to ask for the liquor with the curious name.


“Give me a shot of ta-kill-ya.” There it was again. Oh man... She was starting to get freaked out.


“Tequila?” The bartender asked for clarification.


The bartender turned away and she tried to recall his name.  She studied him as he prepared her drink, thinking she should know him. He knew her.


Chattering voices from nearby conversations made her wonder if she knew anyone else. She canvassed the dimly-lit club. Finely dressed diners sipped on champagne and munched on caviar in candlelit booths. Izzy felt out of place and they seemed retro.


The seconds it took the barkeep to pour the shot and place it before her seemed like hours. “Bottoms up.” He coaxed her with a corrupting smile.


“Ah, what the hell...” She wrapped her fingers around the shot glass. “I’m probably dead anyway.” Tilting her head back, she poured the liquid, warm and stimulating, into her mouth.


“That’s what you said the last time we met.” The voice, smooth and personal, drew her in and tempted her with thoughts of amorous pleasure.


“Excuse me?” The time it took to focus on the silhouetted figure felt like eons instead of seconds. When it did, an odd sense of familiarity rained down on Izzy.


She stared—no, ogled—at the flyer occupying a bar stool a couple of feet away. He was handsome in a rugged sort of way, and far from clean-shaven. The beginnings of a beard, which looked more like two-day stubble, added to his appeal. Eyes glistening like silvery pearls peered at her flirtatiously. When he smiled, Izzy was smitten.

PAID ADVERTISEMENT
Posted by Debra L Martin at 7:00 AM