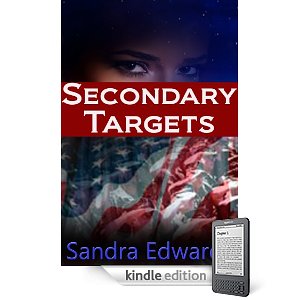 Book Blurb:
What would you do if you found out everything you thought you knew about your father turned out to be a lie?
After being bitten by the genealogy bug, Grace Hendricks awakens a conspiracy that's been lying dormant—ever since she disappeared shortly after her father's funeral eleven years ago. Now, here in the present, his military records have been tampered with and his death certificate is no longer on file.
In an effort to unravel the mystery she turns to Eric Wayne, an old flame she thought she'd tucked safely away into the past. Eric has no intentions of getting involved with Grace and her crazy allegations, until he realizes that someone else is buried in his former commanding General's grave.
Buy Links:
US Kindle: http://www.amazon.com/dp/B0042AMG9C
UK Kindle: http://www.amazon.co.uk/dp/B0042AMG9C
Amazon Print: http://www.amazon.com/dp/1453829431
BN Nook: http://search.barnesandnoble.com/books/product.aspx?ean=2940011965142
Review Snippets:
"I'll admit that I could never say no to the high-concept premise, and I'll also share the news: Sandra Edwards has once again written a book that absolutely delivers on the premise." -- Steve Windwalker --Kindle Nation Daily
"An excellent thriller...filled with secrets and deception, love and romance, spies and intrigue..." --Readers Favorite Book Reviews
Author Bio:

Sandra is  an award-winning author with eclectic tastes. She writes in a variety of genres such as paranormal (mostly time travel and reincarnation), contemporary, and suspense. Her books often push the  envelope and step outside the boundaries of conventional romance. She lives in the U.S. (west coast) with her husband, two kids, four dogs and one very temperamental feline.
http://www.sandrawrites.com
http://www.facebook.com/SandraEdwards.Author
Secondary Targets Excerpt:
The early morning view from the table on the terrace at Cherilyn’s beachfront home hypnotized Eric, but he fought its magnetic power. A faint scent of salt drifted through the sea air and the water was amazingly calm, except right up along the shoreline where it rolled lazily in and out. Eric pulled his gaze away and stared at the mocha-black coffee steaming in his mug, the muddy liquid fueled his imagination.
If the General had belonged to some covert organization, not unlike the one Cherilyn professed to be a member of, that would explain a lot of the man’s secrecy just prior to his death.
Maybe the General’s colleagues had wanted something he wasn’t willing to relinquish. But what? What could the General have had that would’ve caused his associates to put a bullet in his head?
Was it incriminating evidence? Eric had no doubt that just such a thing was going to be found at the end of the trail, wherever that might be. But he didn’t believe for a second that it had caused the General’s death.
The man he’d known, had served under, was much too loyal to build a case against his colleagues without a good reason. Eric didn’t know what bugged him more. The notion that the General would be mixed up in a mess like this in the first place. Or, that Eric couldn’t figure out what would make his former commanding officer turn on his own kind. As far as he could see, there was only one thing that would induce the General to do that and she was sitting an arm’s length away. Grace.
Posted by Debra L Martin at 7:00 AM