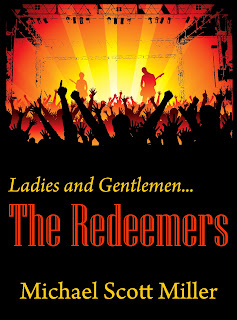 Can you give us a brief overview of your latest book?
Ladies and Gentlemen…The Redeemers tells the story of Bert Ingram, once a successful rep in the music industry, who has lost his way.  Desperate for redemption, he decides to put together a band and begins recruiting musicians who have only one thing in common:  the need to overcome a significant obstacle in their lives.  As the story unfolds, the volatile mix of the musicians' personalities and backgrounds threatens to derail the band, but they eventually begin to realize they have more to gain from one another than they ever could have imagined.
Did you try the traditional route to publishing, i.e. querying agents/publishers?
I tried that route and in retrospect, it was a colossal waste of time.  There are so many more effective things an author can do to promote his or her work.  Literary agents receive an average of 100-300 query letters per week and take on only a handful of new projects at a time.  I don’t like those odds.  I’d much prefer to be on my own, with control of when and where the book is sold and how it is marketed.
What factors influenced your decision to self-publish to Amazon?
As a relatively unknown author, self-publishing through Amazon allowed me to get instant access to Kindle owners, by far the largest segment of the ereader market, and to set the price at a very low $0.99.  Through Amazon’s affiliate, CreateSpace, I also was able to publish a paperback version which sells for $7.95.
Did you hire an editor to review your manuscript before publishing?
I used Carol Gaskin at Editorial Alchemy.  Carol did a spectacular job editing the book, helping me with point of view, and knowing just where to insert or delete something to set a scene or make a scene work.  I would highly recommend her.
What have you learned during your self-publishing journey?
I have become much more aware of, and comfortable with, the social networking element of being a writer and published author.  I now spend a great deal of time on sites like Kindle Boards and BestsellerBound where I interact with and learn so much from other writers.
I am also still amazed by the number of books that are published (self-published or otherwise) every week.  At least for me, writing a book was not an easy thing to do and I continue to be stunned by the number of new releases each week and the staggering number of queries that literary agents receive.
Besides Amazon, are there any other sites where your books are for sale?
Thanks for asking.  My novel is available at the following:
Amazon (Kindle or paperback):  http://tinyurl.com/4zpmzhk
Nook:  http://tinyurl.com/3md2zcc
Kobo:   http://tinyurl.com/3djcz45
What kinds of marketing [twitter, facebook, blog, forums] are you involved with for promoting your book(s)?
My efforts have largely involved social media with the mantra of creating a presence everywhere that I can.  This includes interacting with and requesting reviews from book bloggers, participating in online reader/writer communities such as Kindle Boards, BestsellerBound, and goodreads, and interacting through Twitter (@MichaelScMiller), facebook, and LinkedIn.  I’ve also sent out press releases, as well as media kits to local newspapers and alternative weeklies.  The book was recently featured in Montgomery Newspapers (a local weekly with a circulation of 40,000+).  In addition, I maintain my own website for the book, (www.ladiesandgentlementheredeemers.com) .
Do you find it difficult to juggle your time between marketing your current book and writing your next book?
You just hit on one of the greatest difficulties of being an author.  The balance is exceedingly difficult to maintain and whenever I am doing one, I feel like I am neglecting the other.  I would love to be able to spend more time on both marketing and writing.
What advice would you give a new author just entering into the self-publishing arena?
You have to really want it.  It is a long journey, not only the writing, but doing all the marketing and promotion afterward.  So my advice is to be prepared for long hours, but don’t let that stop you.  Writing and publishing has been one of the greatest experiences of my life.
What’s next for you?
I have just begun writing another character-driven novel, this one with an element of mystery to it, but I’m reluctant to say more out of superstition.  I’ll be sure to let you know when I’m closer to releasing it, though.
Thank you so much for hosting me here today!
Posted by Debra L Martin at 8:00 AM