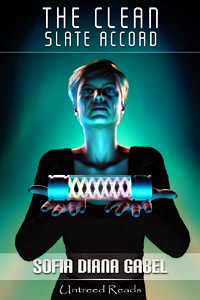 Briefly describe your journey in writing your book.
I’ve been writing for as long as I can remember, but I wrote The Clean Slate Accord because, like the protagonist, I long for world peace. I wondered what would happen if someone actually did something to create a peaceful world. Thus, The Clean Slate Accord emerged. I also love to use strong female protagonists and characters in most of my stories.
What genre are your books?  Do you write in more than one genre?
The Clean Slate Accord is science fiction, but I have also had a historical fiction/women’s fiction novel (A Woman’s Way, Piraeus Books) recently published. I love to write in different genres, and have in fact, has a short horror story that won first place in a monthly international contest (Spinetingers, Love’s Lost, October 2010).
If you write in more than one genre, do you use a pen name?
Sofia Diana Gabel is my pen name!
Did you query agents and traditional publishers?  Did you receive an offer of representation or a book contract?
I have queried agents and many, many publishers in my time. I could probably paper the walls and my neighbor’s walls with the rejection letters! I received both from Untreed Reads, first the offer, followed by the contract.
What factors influenced your decision to sign with Untreed Reads?
I did my research and found that they were a very approachable and solid publisher, plus, they wanted to publish my story!
How involved are you during the creative process for your book’s cover design?
Very involved! Untreed Reads consulted with me before, during and after the design process. They love to have their author’s input. I think that’s wonderful.
Do you plan to self-publish any other books or will you stay with Untreed Reads?
I will stay with Untreed Reads for as long as they’ll have me! I have several novels in the revision stage that I’d love to submit.
What kinds of social media [twitter, facebook, webpage, blog, writing forums] are you involved with trying to garner attention for your book(s)?
I use all of the social media venues, including Facebook, Twitter, Amazon forums, Redroom, Goodreads, blogs (approachablefiction.blogspot.com & montysphynx.wordpress.com) and my website of course (sofiadianagabel.com).
How do you feel about the world of digital publishing?  Do you think it will replace traditional publishing one day?
I love how digital publishing has caught on. I still love the traditional paper publishing as well, but digital is definitely an exciting way to publish, especially with so many different electronic readers available now.
What is the biggest thing you’ve learned during your journey as an author?
Humility! No matter how great I think a new story is, my critique group is at the ready to tell me just why it isn’t! Every author needs a dose of reality once in a while.
Do you have any advice for new authors?
Keep at it, even though you’ve heard that a million times. The more you try, and stumble, the better you’ll get. And, join a writing workshop or critique group.
What’s next for you?
Several novels in the works. One is almost done, an environmental-themed story, and another, a historical romance, is in the query stage. A thriller is just about done, but needs a few more revisions.