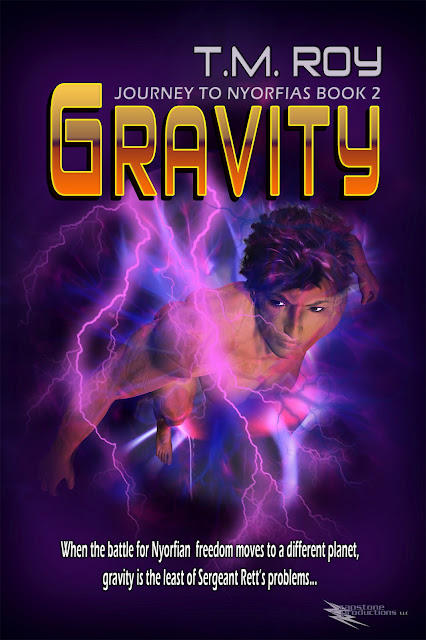 This is the second installment in the “Journey to Nyorfias” series. GRAVITY picks up not too long after book 1, “Convergence”end. Rett is a Sgt. in a Nyorfias elite commando group, F-troup and their orders are to travel to the sister planet of Epnoce with the rest of the 2023rd to try and defeat the Yixolyrn Coalition, an alien race, once and for all. The planet Epnoce seems to be against them with its harsh climate and heavy gravity, but Rett is affected by more than planetary anomalies. Her ego-merge Pam is gone, her sister and lover are acting strange and she’s running into problems with her long-time friend and commander, Evetez.  Everything appears to be against her and Rett is struggling to cope with adversity while keeping up with training in the heavier gravity.

What Rett doesn’t release, however, is that she is a major player in the game of balance between light vs. dark in the universe. The deity of this universe, Pheasyce, is forced to watch as Rett is stripped of support from everyone who cares about her. Rett must reach deep within herself and rise above the confusion and depression that threatens to overwhelm her or the deity, Xonomer, will win.

The author does an excellent job of letting the reader inside Rett’s head to feel her outrage as she struggles to keep it together to her utter dismay as one thing after another is stacked against her.  Her combat skills are legendary, but is it because of love and respect of the soldiers under her command that would willingly die for her or is she a lone wolf who needs no one’s support to accomplish the impossible?

The book has its fair share of intense battles against the Yixolyrn Coalition including an epic battle of wills between Rett and her old nemesis, Avok. There is a lot more going on in this book besides battles to defeat an evil enemy. To say any more would be too much of a spoiler, but suffice it to say, T.M. Roy, keeps you entertained and throws some unexpected curve balls into the mix. To fully understand what has happened in the past, I would recommend that you read, “Convergence” first, but even without reading book 1, GRAVITY is one that scifi fans will enjoy. Recommended.

Disclosure policy: http://twoendsofthepen.blogspot.com/p/review-policy.html
Posted by Debra L Martin at 8:00 AM