Today I’d like to invite Nichole Bernier to share some of her thoughts and insights about her new release, THE UNFINISHED WORK OF ELIZABETH D. I was privileged to receive an advance copy of the book from the publisher and enjoyed it immensely.  You can find my review here: http://twoendsofthepen.blogspot.com/2012/06/review-unfinished-work-of-elizabeth-d.html 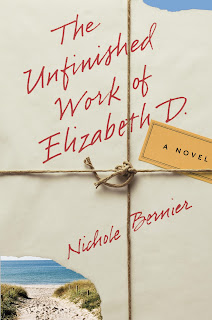 Give us a short, meaty description of your novel.
It's about a woman who inherited the journals of a friend who died, and realizes she didn't know her friend as well as she thought, including where she was really going when she died. Set in the anxious summer after the September 11th attacks, this story of two women —their friendship, their marriages, private ambitions and fears — considers the aspects of ourselves we show and those we conceal, and the repercussions of our choices.
Your novel is set in 2002, and the main character has a lot of fears/neuroses about terrorism. Why did you choose to set the novel in this time?
In 2002 it felt as if anything could happen — reservoirs poisoned, ebola unleashed, that you could wake up and the sky would be magenta. I think most people, myself included, felt for a while these things were not only possible, but likely. Most of us moved on from that paralyzing fear, but it was fascinating to me to create a character who had been a confident and rational person, but became obsessed with protecting her family from so many unknowns, and could not move on.

Your plot centers on a woman who’s responsible for deciding what to do with her recently deceased friend’s trunk of journals. How did this idea of bestowing journals (via a will) come to you?
I’ve always kept a journal, and been fascinated with why, exactly, people do this crazy thing, put private thoughts to paper. What happens if you’re hit by a truck tomorrow? Were you really writing for your own reflection and catharsis, or were you writing for others to see it someday, your chance to have your final say? For peace of mind, years ago I wrote a note in my will designating a trustee for my journals, someone who’d be responsible for having the mother of all bonfires.

The what-ifs that generated the novel spooled out from there. What if you inherited the journals of a friend without clear direction what to do with them, and learned you didn’t know your friend nearly as well as you thought, including where she was really going when she died? How might you feel about why she didn’t confide in you, and how might that make you realize ways you were not candid with loved ones, yourself? What might the dynamic be with the widower who resents not being given his wife’s journals?

It was tremendously satisfying to explore that juxtaposition of the faces we show the world and those we hold close, our private ambitions and fears, and what it costs us in the end.

A big part of your novel concerns Elizabeth and Kate’s status as working mothers struggling to balance their jobs while raising children. As a mother of five, how do you manage finding time to write?
Before I started my novel I was a fairly multifaceted person: running, photography, cooking, skiing, golf. When I became serious about the novel most of my hobbies went down the tubes, and now I don’t watch a single TV show. I don’t say that with any particular pride, and in fact it’s a little embarrassing to be that out of touch with popular culture. But it’s amazing how being a busy parent has the laser-like ability to triage what’s really important to you.

I have an unscientific theory that if you are an involved parent, regardless of how many children you have, you get about three things to call your own. And the only other things that have remained for me are being involved in my kids’ schools, and a base level of exercise, which changed from running (reluctant, frenetic) to yoga (strengthening and calming). More than anything else, though, it was critical to have a supportive spouse who’d give me the hours and sometimes days away to really immerse myself in tough sections of writing and revision.

Your book deals candidly with marriage as it exists several years after the honeymoon’s over. One part of the book reads, “It was a gift, solitude. But solitude with another person that was an art.” Do you think it’s possible to share solitude with another person?
That’s the million-dollar question for relationships, I think. If you can be quiet in another person’s company and engaged in your own engrossing activity, with no discomfort or distraction or envy, it’s priceless. But it’s hard. There’s a lot of bustle that has to get done in the downtimes, and even when you go quiet, there are some things that are just difficult to do in the presence of someone else. I can’t write in a room where the TV is on which is how my husband likes to work at night, but sometimes I join him to do other reading and computer work. I think it’s a matter of finding the common ground, the common setting, choosing where and when you can find that togetherness.

Nichole Bernier is author of the novel THE UNFINISHED WORK OF ELIZABETH D (http://wellesley.indiebound.com/nichole-bernier), and has written for magazines including Elle, Self, Health, and Men’s Journal. A Contributing Editor for Conde Nast Traveler for 14 years, she was previously on staff as the magazine’s golf and ski editor, columnist, and television spokesperson. She is a founder of the literary blog Beyond the Margins (http://www.beyondthemargins.com), and lives outside of Boston with her husband and five children.