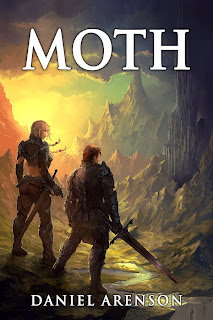 Can you give us a brief overview of your latest book? Is it part of a series?
My new book is titled Moth, a fantasy novel for fans of books like The Hobbit. It's the first in a series simply titled The Moth Saga. Moth is about a world torn in two--one half always in daylight, the other always in darkness. Here's the book's blurb:

That was a long time ago.

My people are the fortunate. We live in daylight, blessed in the warmth of the sun. Yet across the line, the others lurk in eternal night, afraid... and alone in the dark.

I was born in the light. I was sent into darkness. This is my story.

You can learn more about Moth at its website: http://DanielArenson.com/Moth
You can see the book at Amazon here: http://www.amazon.com/dp/B00FI4BYEE

Do you have a favorite character?
My favorite character might be Bailey (the girl who appears on the cover). She's tough, sarcastic, and simply badass; she doesn't let anyone lead her or tell her what to do. This fiery, headstrong attitude gets her into lots of trouble, but it makes her fun to write about.

Have you ever had a minor character evolve into a major one? Did that change the direction of the novel at all?
That did happen in my trilogy The Dragon War.  The first book, A Legacy of Light, features a young urchin named Erry. She's an orphan girl who lives on a boardwalk, stealing and rummaging through trash to survive, sharing a few hidden nooks with stray cats. Though small physically, she's tough and foul-mouthed. At first, she was meant to just be a secondary, throwaway character. But her strong outer shell, which shields an inner vulnerability, made her a great character to write. In the sequels, she's promoted to a point-of-view character and becomes one of the most important people in the series.

You can learn about A Legacy of Light here: http://www.danielarenson.com/ALegacyOfLight.aspx
What is your writing process? Do you listen to music or do you like silence?
I always listen to music while writing. For intense scenes, I'll listen to metal groups like Arch Enemy and Amon Amarth. For lighter scenes, I often listen to soundtracks (I love almost everything by John Williams, James Horner, and Howard Shore) and epic music such as Two Steps from Hell.

Do you outline your story or just go where your muse takes you?
I did outline Moth extensively. It's my first book in this new world, and I felt that I needed a detailed blueprint.

The sequel (which is now available for pre-order) was done with a much simpler outline. By now, I knew the characters, mood, and overall storyline a lot better. With only simple plot points to guide me, I was able to just delve in and write.

Did you hire an editor to review your manuscript before publishing?
Yes! My editor for my dragon novels (Song of Dragons, Dragonlore, and The Dragon War) is Anne Victory. Moth was edited by Ashley Davis.

Besides Amazon, are there any other sites where your books are for sale?
Here are some places where you can buy Moth:
Amazon.com: http://www.amazon.com/dp/B00FI4BYEE
Amazon.co.uk: http://www.amazon.com/dp/B00FI4BYEE
Barnes and Noble:  http://www.barnesandnoble.com/w/moth-daniel-arenson/1117186913
Kobo: http://store.kobobooks.com/en-CA/ebook/moth-1
iTunes: https://itunes.apple.com/us/book/moth-the-moth-saga-1/id729469576

Do you find it difficult to juggle your time between marketing your current book and writing your next book?
While I do promote, I feel that the best kind of promotion is writing the next book. Releasing a new book stirs interest in the older ones too, and it's really the best way to get the word out.

What’s next for you?
Keep an eye open for Empires of Moth, the second book in The Moth Saga! It'll be released on December 12, and you can already pre-order it on Amazon. :) Take a look: http://www.amazon.com/dp/B00GOFTVXM

Thank you so much for this interview! Happy reading. :)
Posted by Debra L Martin at 8:00 AM