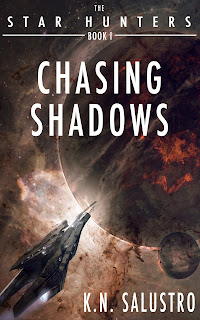 My most recent book is Unbroken Light. It’s the second installment of my Star Hunters scifi series, which follows a bounty hunter and a military officer forced into an unstable alliance by a mutual enemy. The books have plenty of action, aliens, and far-off planets, for those who are in to adventure space operas.

Do you have a favorite character?
Lissa. Definitely. She is one of the main characters of the series and is a bounty hunter who gets pulled into a struggle that she tried to run from all her life. She finally gets backed into a corner but she never gives up, and she’s not afraid to do what she thinks is right, even that puts her on the wrong side of the law. Actually, especially if that puts her on that side. I may not agree with her sense of morality, but she is one of my favorite characters to write.

Have you ever had a minor character evolve into a major one? Did that change the direction of the novel at all?
Yes. Yes I have. A prime example is Jason Stone, who originally had a much smaller role and nowhere near as much development in the earliest drafts of Chasing Shadows (the first book in the series). As I continued to work on Chasing Shadows, I found that Jason kept working his way back into the plot, and the more I explored him as a character, the stronger the book felt. He’s still not a main character, but he’s had a much, much stronger influence on the direction of the series as a whole than I ever thought he would, and he will continue to do so in the third book.

What factors influenced your decision to self-publish your book(s)?
For me, the biggest draw of self-publishing was the ability to keep total creative control over the content of my book. When I finished writing Chasing Shadows, I knew that the ending in particular would probably be a bit of a turn-off for most traditional publishers. The book ends on a cliffhanger, and most traditionally published first installments tend to have a more positive and more closed ending. That’s not a bad thing, but there was a very definite place that I wanted Chasing Shadows to end, and self-publishing let me keep that ending, along with all the other creative decisions I made.

How involved were you during the creative process for your cover?
I commissioned a freelance artist for my covers, and I was thrilled to be very involved with the creation of the images. I had admired the artist’s work for a couple of years before reaching out to him for the book covers, so I was excited to see what he would come up with and wanted to give him some creative freedom, but I did get to tell him what I was looking for concept-wise, what kinds of colors I wanted, and what specific elements I wanted to incorporate. I gave feedback when he showed me drafts and ask for changes as needed, but I was really happy with the images he created for me.

Do you outline your story or just go where your muse takes you?
When I first started writing, I was very much a go-with-the-flow kind of writer. I let the plot go where it wanted and the characters do as they pleased. Then I ended up with way too many characters and plot points to keep everything straight in my head. So, I started using sticky notes as a way to keep track of the important characters’ timelines. Each character has their own assigned color, and I handwrite their actions and the impacts of those actions on a note before I stick it on the designated wall. It’s an easy way to keep their movements in chronological order and keep an eye on the pacing of the action. This method also adds a lot of color to my walls, though most people tend to think it’s more weird than decorative. There are a lot of notes.

What have you’ve learned during your self-publishing journey?
The biggest lesson I’ve learned is to be confident in my own work, and have patience. I started out small and it took time and effort to get to where I am now, and it will take even more time and even more effort to go further. As long as I am passionate about what I am doing, however, it is all worth it.

Besides Amazon, are there any other sites where your books are for sale?
Yes! The print editions are available through CreateSpace, and other digital editions can be found through Smashwords, Barnes & Noble, Kobo, and the Apple iBook Store.

What advice would you give a new author just entering into the self-publishing arena?
Be prepared to be your own biggest cheerleader. You need patience, you need determination, you need thick skin, and you need to have enough confidence in your work to trust it to stand on its own. Confidence does not mean arrogance, however. Be willing to listen to criticism and take away the constructive parts so you can become a stronger writer. Put out the very best you can at this point in time, but never stop learning and growing as a writer. And, most importantly of all, editing and proofreading are your friends. Do not skimp in those areas.

Besides writing, do you have any other passions?
I actually double as a plush maker. I run an Etsy shop called Dragons by Kris where I make—you guessed it—dragons, though I’ve started branching out into custom patterns and other creations, including a couple of critters from my Star Hunters series. Plush making is something that can be frustrating, but I enjoy doing it, and I love holding my finished works in my hands. I’m still learning, but I’ve already come a long way from where I started three years ago. 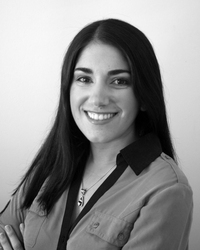 K.N. Salustro is a science fiction and fantasy writer from New Jersey who loves outer space, dragons, and good stories. In addition to writing, she also runs an Etsy shop, works as a freelance editor, and makes art for her Society6 and Redbubble shops.

Her debut novel Chasing Shadows was a finalist for the 2015 Cygnus awards, and is currently available for purchase through Amazon, Smashwords, Barnes & Noble, Kobo, the Apple iBook store, and CreateSpace. The sequel Unbroken Light can be purchased from the same locations.