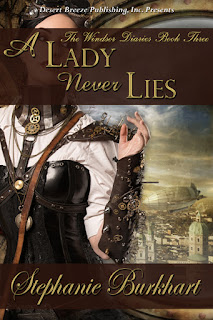 Richard approached and stood behind her, looking past her shoulder. "I suppose it can be. Do you want to talk?"

Richard remained quiet, aching to touch her and offer her the physical comfort he believed she craved, but he waited for her to give a signal.

"And we've got an escort to meet with the coal mine owners in York."

"I saw Jonas talking to them and it didn't sit right with me."

"I can't trust his motives or intentions. They were questionable the last time he visited."

She turned around to face him again, but Richard kept his hands clasped behind his back, straining his will power. He wanted nothing better than to touch her all over.

"He's a reporter from the future. I don't trust him much, but I think there's something physically wrong with him. He told me he felt time displacement the last time the machine was used and the Professor sent him back to study his vitals."

"I take it that's unusual?" she questioned.

"Yes." He paused. "He promised to keep an eye on Jonas, but I need to watch out for him."

"Why do you look so withdrawn? I hate seeing you like this. Is it Augustus?" Richard asked.

"Some. He's out of his element. This is all new to him. It will take him time, but I believe we've laid a foundation to build a relationship on."

She raised her hand, cupping her cheek. "I don't know what I'll do without him."

"You've got to think about that possibility. I don't mean to sound insensitive, but we've both seen him. He's not getting better."

Jocelyn moved toward him. She wrapped her arms around his waist and rested her head against his chest. "Hold me."

Richard's heart soared with happiness knowing that she reached out for him, because his own willpower was about to break. Then the reality of the situation crashed against him.

Jocelyn Dunkirk is not your typical Victorian lady. She dresses in leather, wears goggles and is not afraid to get a little grease under her fingernails. Gentlemen avoid her like a dirty rivet.

Richard Windsor, the Prince of Wales, travels through time to claim Jocelyn's heart, but if it isn't one challenge, it's another. He determines to be a constant, steady presence in her life, hoping to prove he'd make a worthy husband.

Jocelyn's facing a bucket full of problems. The Prime Minister wants her to assist in ending a coal strike before it cripples the nation while her father attempts to recover from a serious injury. Will Jocelyn's dedication to her country and family ruin the one chance she has at love? 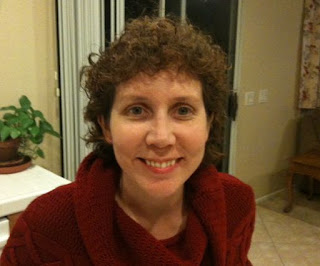 Author Bio: Stephanie Burkhart is a 911 dispatcher for LAPD.  She was born and raised in Manchester, New Hampshire.  After serving 11 years in the US Army she currently calls Castaic, California her home. Stephanie was married in Denmark in 1991 and has two young sons. She adores chocolate, is addicted to coffee and enjoys early morning walks.  She's also an assistant den leader for her son's Cub Scout den and is a Boy Scout mom. She writes paranormal, contemporary, and steampunk romance and has two children's books published with 4RV Publishing.

FIND ME ON THE WEB AT:

Follow the tour and comment; the more you comment, the better the chances of winning. The tour dates can be found here:
http://goddessfishpromotions. blogspot.com/2016/08/book- blast-lady-never-lies-by- stephanie.html