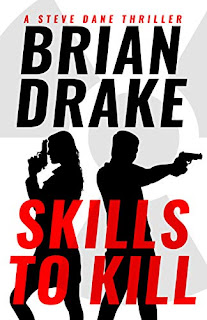 5 of 5 stars
I want more of Ex-CIA agent Steve Dane and his lady love, ex-FSB (formerly KGB) agent Nina Talikova!!!! Steve and Nina are freelancing agents these days working hard to foil as many bad guy plots as they can. Their latest target is The Duchess who wants to buy a portable nuclear weapon and Steve is determined to bring her down. There's a major problem when Steve discovers his ex-30-30 partner, Sean McFadden is her #2 man. Steve has a mission to accomplish and he can't allow any sentiments for former friends to get in the way.

The action is non-stop as Steve and Nina track The Duchess across Europe, Mexico and the United States. The prose is clipped and to the point, keeping the plot moving forward at a fast pace. Mr. Drake knows his weapons and it enhances the storyline without overpowering it. I look forward to reading more from this author.

I received a copy of this book from the publisher and was not obligated to leave a review.

Blurb:
Lovers. Spies. Killers.
Steve Dane should never have set foot in Italy. After witnessing a young woman's kidnapping, the former agent turned rogue mercenary is hired to get her back by the girl's father and soon finds himself drawn in to the decades-old vendetta behind the crime.

Racing against time as her life hangs in the balance, Steve battles the mafia who want him dead and the police and international agents who want him out of the way. With the help of his lover, former Russian spy Nina Talikova, he rushes down a path that leads into an ever-more complex world of deception ruled by a powerful and mysterious woman known as The Duchess.

Life, it seems, is getting cheaper by the minute. And The Duchess has put a price on the ultimate weapon that will make it all but worthless. Only Steve and Nina have the power to stop a clock that is ticking away the life of the missing girl--and the world.

Excerpt:
“Will you shoot him already?”
Steve Dane laughed and shifted in the bed. The accordion down the hall continued blaring. Nina rolled away from him and pulled the covers over her.
Male and female laughter mingled with the noise. The party had been going on since midnight.
“Laugh all you want,” she said. “You won’t get any of my goodies until that man is dead.” Her words were dusted with a soft Russian accent.
Dane said, “Other than the noise, it’s a nice hotel, right?”
“It is not. I get to pick next time.”
“This is one of the nicest hotels in Italy. This is what you wanted.”
“Next time we’ll go to Geneva.”
The downstairs staff had acknowledged receiving many complaints, but they were powerless to help. The accordion player was a pop star, whose name Dane had forgotten, who had lots and lots of money that he spent at the hotel and surrounding establishments, and they were not going to disturb him lest he start breaking things and decide to spend his lots and lots of money elsewhere.
“It’s too late for polka,” Dane had told them. “It’s the wrong century for polka.”
The appeal had been ignored. This was no way to start a vacation.
Dane drifted off to sleep and started to snore. He jerked awake for a moment when Nina punched him in the arm.
Dane rose before Nina, who lay on her stomach, arm dangling over the side of the bed. Her snoring sounded like a chain saw stuck in a log. After a hot shower, he scraped whiskers off his face and pulled from the closet a set of clothes he’d had the hotel dry-clean and press the day before.
The long-sleeved Sedona Silk shirt with pearl buttons fit perfectly, covering the warped and puckered flesh on his right arm. Years ago, Dane had been in a helicopter crash while on a CIA mission in Central America. The ruptured fuel tanks splashed gasoline onto Dane’s clothes and the clothes of a friend trapped in the wreckage. Dane pulled his friend out. The chopper exploded, and they went up like Roman candles. Dane hit the dirt and rolled back and forth like a madman and put the fire out. He’d been lucky. Only his right arm, part of his side and chest, and a portion of his right leg had been affected. His friend Len Lukavina had not been so lucky.
To Dane the scars had become a symbol with its own motto: “You’ve survived the worst. Everything else is easy.”
But the scars also symbolized a darker truth: “You are not invincible.”
After cutting loose from the CIA, Dane had formed a mercenary unit called the 30-30 Battalion. A skirmish in South Africa netted him several million dollars’ worth of diamonds, and he disbanded the unit. It was time to fight the battles he wanted, to bring a fight to the predators who sought to exploit the defenseless who had nobody to turn to. Idealistic, yes. He could afford to be idealistic. And he could afford the luxurious lifestyle that came with such independence.
Plenty of action, plenty of rough spots, and he’d always come out on top. Then he almost died in a fire. And then came a betrayal so close to home that he turned his back on that home and took off for the wild pastures of the world.