THIS PROMOTION IS NOW OVER. Assassin's Curse is back to it's regular price, $4.95. I hope you'll still be tempted to buy it!

I have a small favor to ask before you download the book. Please "like" the book and also "like" my amazon author page (it's over on the far right) here: http://www.amazon.com/Debra-L-Martin/e/B003Q1WLXY  I would really appreciate that. Thank you and Happy Reading!

Assassin's Curse will be coming out of the Kindle Lending Library soon, but I wanted to give all my readers a chance to read it FREE one last time, not just the Amazon Prime members.  So go grab a copy if you love fantasy because the price is going back to $4.95 on Thursday. 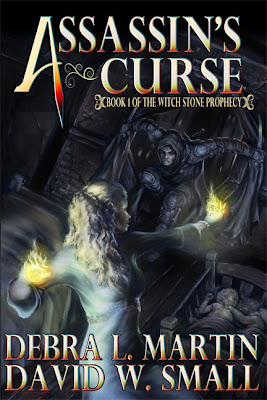 Book blurb:
"There were a few twists in the book that I didn't see coming--which is always a plus. If you're a fan of fantasy, or just plain ol' good storytelling...grab this one. It's a keeper!" WestCoastBookLover

"This is an amazing book. I could hardly put it down once I started. The story is well-written and engaging, really pulling you into this world that David and Debra have created...I would highly recommend this read to anyone who loves an exciting read. Geat job!" Skypointe

When elite assassin Jeda received his assignment to kill a witch and deliver her twin daughters to the Countess of Berkshire, he had no idea it would be his last. The witch stuns him with an elemental blast, but not before he's able to throw his knife. When Jeda regains consciousness, the dying witch is performing a compelling spell between him and her twin daughters.  Now bonded to the girls, Jeda's old life is forfeit. His only thought is to take the girls and run as far away as he can. He has no idea that the twins are the ones spoken of in the long-lost prophecy of The Witch Stone. Forces are gathering: the white witches want to teach them; the Countess wants her grandchildren back, and the guild has sent their best assassin to bring Jeda back, dead or alive.

Jeda must use all of his assassin skills to stay one step ahead of them all, but will it be enough to save himself and keep the children of prophecy alive?