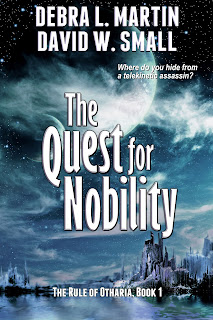 Excerpt:
Splat.
Avikar, startled from his musing, looked down and saw a tart sliding down the front of his jacket leaving a trail of whipped cream as it fell to the floor.  “What the…?”
Laughter erupted behind him.
Whirling around, he saw Darius Telkur standing behind him, smirking.  Beside him was his twin sister, Dyla, a striking raven-haired beauty with blue-violet eyes.  She was trying hard to suppress her own smile.
Pulling the handkerchief from his pocket, Avikar wiped the remnants of the whipped cream off his jacket. “How dare you?”
Darius stood with his hands on his hips and stared defiantly at Avikar. Tall, broad-shouldered, and handsome with a finely chiseled jaw, he looked every inch a royal.  He didn’t need to use his telepathic ability to see that Avikar was fuming. “How dare I what?  I didn’t do anything.  I walked in, saw the pastry flying through the air, and then smack, it hit you.”
Avikar looked back and forth between the twins. He hated both of them, for their stunning good looks, for their PSI abilities, and for the success they’d already achieved in their young lives. He didn’t notice Dyla glance to her left at Eclasius Jortac, who was standing near the pastry table.  Nor did he catch the gleam in the young man’s eye. If he had, he would have known immediately where the pastry had come from.
“Avikar, my brother and I were in the courtyard greeting guests and only now came into the hall.  We had nothing to do with that tart hitting you,” Dyla explained.
Avikar stuffed the handkerchief into his pocket and glared at the twins. “Forgive me if I don’t believe that, Lady Dyla.”
Darius took a step towards the little man.  He didn’t take it lightly when anyone challenged his sister. “Are you calling my sister a liar?”
“Did I say she was a liar?” Avikar replied, his voice rising with each exchange.
A few paces away, Duke Levon looked over his shoulder when he heard the loud voices.  He excused himself from his guests, and hurried toward the threesome. “What’s happening here?” he asked.
“Nothing at all, Father,” Dyla replied innocently.  “Darius and I were on our way to find Ty.” Dyla pulled on Darius’ sleeve steering him away from their father.
Duke Levon, a well-built man of medium height with graying brown hair and a neatly trimmed mustache, watched his children depart, not exactly sure what had transpired between them and Avikar.  With two sixteen-year-olds full of spirit and intricately bonded to each other, there was never a dull moment around the mansion.
“Avikar, a word please.”  Levon said. He motioned Avikar to the side of the room for a private conversation.
Avikar didn’t wait for Levon to begin. He rushed headlong into his deception. “Sire, I’ve been waiting to talk to you.  It’s a matter of great urgency.”
“Fine, I will listen, but first I want to clear up some disturbing news I heard.”
Avikar wrung his hands, afraid that Levon had found out about his plan with the Red Alliance. “What news, my lord?”
“Did you order a thief to be dosed with feverwort?”
Avikar shifted his weight from one foot to the other, relieved by the topic of conversation, but still apprehensive that the duke had found out about his secret plan.
“You know full well that I frown upon that practice,” Levon continued.  “Too much of that drug can permanently extinguish a person’s PSI powers.”
“My lord, are you questioning my authority over the waterfront district?”
“Not your authority, Avikar, only your zealous nature in governing it.”
“I did order the punishment, but it was necessary.  It was the second time that thief had been caught stealing by using his telekinetic abilities.  He needed to be stopped and a clear message sent to those that abuse their powers in such a way.”
“Messages can be delivered in other ways, Avikar.  Don’t do it again.  It’s not the way we handle things in this duchy.  I hope I’m making myself clear.”
Avikar nodded.  “Of course, my lord, it won’t happen again.”
“Thank you, Avikar.  Now, what did you want to talk to me about?”

~~~~~~~~~~~~~
Blurb:
The parents of royal Otharian twins Darius and Dyla have been murdered; their cousin is stealing their throne, and they are falsely accused of murder. Their only choice is to flee to the forbidden and quarantined planet Earth, but it could turn out to be a one-way trip.

To return home, they must find an ancient crystal, that once belonged to Merlin, to power the return portal. When the twins stumble upon the location of the crystal, the local crime boss sends out his assassin to retrieve it. Can Darius and Dyla use their PSI powers to open the portal home and reclaim their throne before the assassin catches up to them?